Free Screening at UCLA with Director Katabuchi and Producer Maki!

THIS EVENT IS FREE AND OPEN TO THE PUBLIC !

There will be a Q&A session with the Director and the Producer at 21:30pm.

The movie has been nominated for Best Animated Feature in the Independent Films category of the 45th Annie Awards Ceremony that will take place on February 3rd 2018 in California.

We are very excited and have to thank everyone for your fantastic and constant support!

One Year and still in theaters! “In This Corner of the World” keeps moving forward!

After obtaining the Bucheon International Animation Festival Grand Prize for a feature film, “In This Corner of the World” just celebrated 365 days still in theaters in Japan!

With still a few countries left yet to be released in, the movie keeps pushing world wide with very good results in home video entertainment and electronic sell-through platforms!

Thank you for all your constant support! 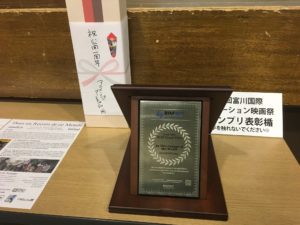 In This Corner of the World opens in France today!

To celebrate the occasion, Director Katabuchi is already in France! 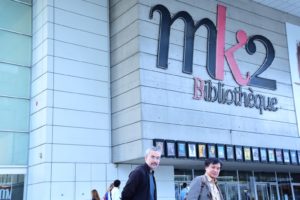 He already attended some of the avant-premieres! 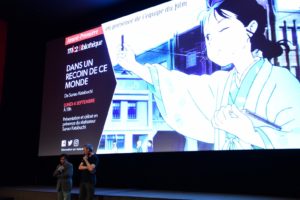 Also he will join animation students at Studio des Ursulines in Paris on Thursday 7th.
And on Friday 8th he will attend movie theater “Le Navire Valence” for a live viewing! 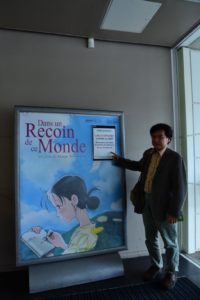 Thanks to the efforts of Septieme Factory, the movie will open in two versions: 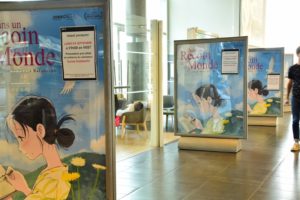 We hope everyone in France enjoys it as much as possible! 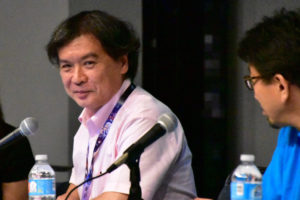 The movie was part of the 2017 Los Angeles “Anime Expo” that took place from July 1st (Sat.) at the Los Angeles Convention Center in the USA. Director Sunao Katabuchi and Producer Taro Maki were there to talk to everyone about the movie.

The film was screened on July 2nd (Sun.) in a completely full venue.  Katabuchi and  Maki engaged the audience right after the show and had a Q&A session, making the event a huge success. There were a total of 3 screenings & talk sessions. The film will be released in the US from August 11st. 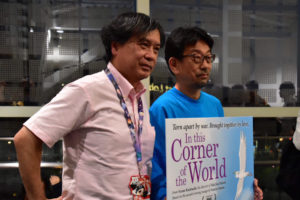 “In This Corner of the World” obtained the highest ranking among all jury members, some of whom will be present and comment before the Canadian Premiere screening held on June 27th 2017.

The Grand Jury Prize comes with a cash award of 100,000 yen and a certificate for Director Katabuchi. The Official Jury is composed of filmmakers, industry professionals, writers and educators.

The official site in Chinese is now open!

The Chinese version of the site has just been published.
By clicking on the link on top, you can go visit the Mandarin language site.

“In This Corner of the World” received the Jury Award for a Feature Film at the 41st Annecy International Animated Film Festival. A storm of acclaims in France! 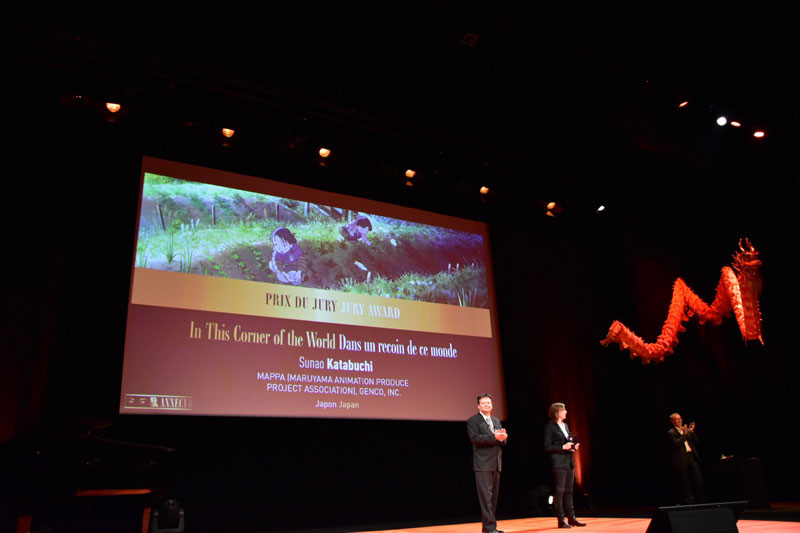 The animated movie that depicts the life of sweet Suzu as she merrily pushes forward against adversity in war-torn cities of Hiroshima and Kure, “In This Corner of the World”, just broke the record of 2 million tickets sold in Cinemas as the Blu-Ray and DVD plans were announced. As the movie carries on both nationally and internationally, the film just participated in the 41st Annecy International Animated Film Festival took place in France and received the Jury Award for a Feature Film. During the Award and Closing Ceremony, Director Sunao Katabuchi and Producer Taro Maki commented the following lines.

“People told me that the movie would not be understood due to a lack of prior knowledge of the setting. But even though the film happens in a specific time and place in Japan, this Award helped me confirm my feeling that people’s hearts are connected around the world. I am incredibly happy to see that Suzu, the heroine of this movie, has already started living in everyone’s hearts.” 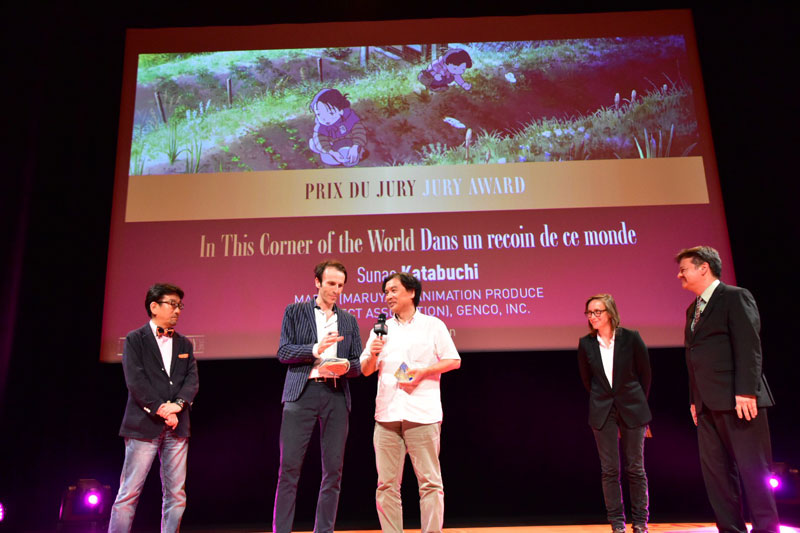 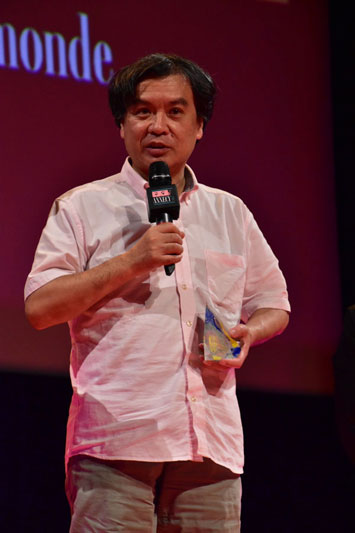 “Today is Saturday 17th of June, we arrived here on Monday the 12th and we’ve been waiting for this day having cheese every day. This movie has received multiple awards in Japan, Best Film, Best Director, Best Music, even Best Leading Actress. Thus receiving this Award in Annecy adds immensely to its International Awards, we are indeed honored. Thank you so much.” 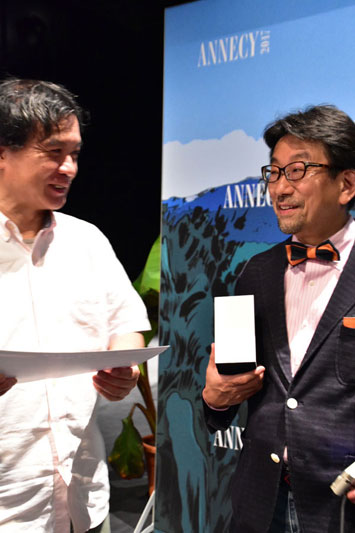 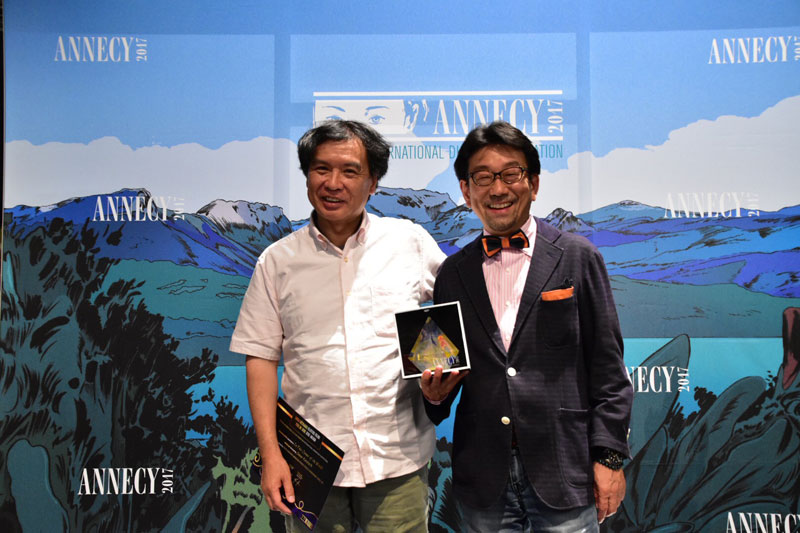 Organized from June 12th to 17th 2017 in France (Annecy). It split from the Cannes International Film Festival in 1960, making it the first International Animated Film Festival in the world. In 1963 the Best Feature Film Award was given to Director Hayao Miyazaki’s “Porco Rosso”, then in 2007 Director Mamoru Hosoda’s “The Girl Who Lept Through Time” received the Special Award for a Feature Film. In 2015 Director Keiichi Hara’s “Miss Hokusai” received the Jury Award for a Feature Film along with other popular films in Japan that have been honored with these Awards.

Film Festival Report
“In This Corner of the World” was the first film to open in the Feature Film competition since June 12th. At 10:30 in the morning, 982 people filled up the Bonlieu Grande Salle and after the movie ended, a press conference was held and Director Katabuchi commented that it was a great challenged to recreate the cities of Hiroshima and Kure as they were more than 70 years ago. The following day, in another conference, he shared that he carried out heavily detailed research in both cities as part of the production.

On June 17th, the day of the Award Ceremony, two conferences were held and he pointed out the intricacies of the lives women had to live through and their culture during war time. There was an autograph session afterwards with a rather large queue. Then out of the 10 films competing from around the world, the movie received the Jury Award for a Feature Film.

After the Annecy Festival, the movie is still scheduled to open around the world. The United Kingdom and Spin open in June, while the United States opens in August and France in September 13th.

About “In This Corner Of the World” around the globe
The movie was released in Japan in November 12th 2016 and is still been shown in Japanese theaters after 220 days. Over 2 million people have seen in theaters. The movie has opened already outside of Japan and will be released in a total of 29 countries.

The official site in French is now open!

The French version of the site has just been published.
By clicking on the link on top, you can go visit the French language site.

Latest news about the movie around the world

1. “In This Corner of the World” will be competing in 2017 Annecy International Animated Film Festival, in the feature film category which will take place from June 12 to June 17 in Annecy, France.
The screening will actually take place the opening day, June 12th (local time). https://www.annecy.org/

Last year, Producers Maki and Maruyama participated and presented it as a “WORK IN PROGRESS”.

2. “In This Corner of the World” will also be competing in the Los Angeles Film Festival 2017 to be held in the United States from 14th to 22nd June. It will be screened on June 20th.

3. The movie will also be presented at the Edinburgh International Film Festival to be held in Scotland, England from June 21st to July 2nd.
It will be screened on June 22nd (Thursday) and June 23rd (Friday) (local time).

4. Release date in the UK confirmed. “In This Corner of the World” will open in the on June 28th. (Distribution: MANGA Entertainment)
Bookings can be made online directly through http://inthiscornerfilm.co.uk/

5. Participation Toronto Japan Film Festival. The movie will be screened in the festival which will take place in Toronto, Canada from June 8th to June 28th.

6. Presentation at Taipei Film Festival. A screening will take place in Taipei, Taiwan during the festival from June 29th to July 15th.

7. Release date in Taiwan confirmed. “In This Corner of the World” will be released in Taiwan from July 28th. (Distribution: Flash Forward Entertainment)

8. Release date in the United States confirmed. The movie will open officially in theaters in the US from August 11th 2017 (Distribution: Shout! Factory).
https://www.shoutfactory.com/editorials-news/editorials/shout-factory-to-release-in-this-corner-of-the-world

9. Release date in France confirmed. “In This Corner of the World” will open in France on September 13th. (Distribution: Septieme Factory)
http://www.septiemefactory.com/